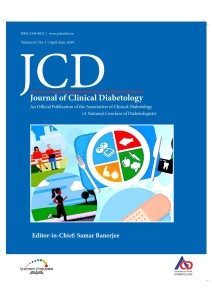 Cure of Diabetes: Dream or Reality

Diabetes is a complex, chronic illness requiring continuous medical care with multiple risk reductionstrategies beyond glycaemic control. Type 2 diabetes mellitus (T2DM) is now emerging as one of the main threats to human health in the 21st century. By 2025 AD, there will be 300 million people suffering from T2DM globally and India will have the highest number of cases (57.2 million) of all the countries.

Type 2 diabetes mellitus (T2DM) is a complex metabolic disorder. The core physiologic defects, often termed as triumvirate since its conception in 1988, are insulin resistance in muscle and the liver, along with progressive loss of B-cell function.1 Decreased B-cell function results in reduced insulin secretion, while insulin resistance in muscle and the liver reduces glucose uptake from blood and its optimum utilization. Together, these defects elevate the blood glucose level (hyperglycaemia) in patients with T2DM. It has been postulated that patients who are in the upper range of impaired glucose tolerance (IGT) are near-maximally insulin resistant and have already lost over 80—85% of their B-cell function. It is the progressive B—cell dysfunction that determines
the rate of disease progression.

Glycaemic control and its beneﬁts in preventing microvascular diabetic complications are proved by various studies. Diabetes control and complications trial (DCCT) had reported variable glycated
haemoglobin (HbAlc) as a cause of increased microvascular complications in conventional glycaemic control group versus intensive one. However, in spite of several indirect evidences, its link with cardiovascular events or macrovascular complications is still not proved beyond doubt. Glycaemic variability (GV) is one more tool to explain relation between hyperglycaemia and increased cardiovascular risk in these populations. Studies on the cellular level and in humans have shown a correlation between increased GV and oxidative stress and endothelial dysﬁmction. GV is signiﬁcantly associated with morbidity and mortality of critically ill people.

View all posts by jcd »»