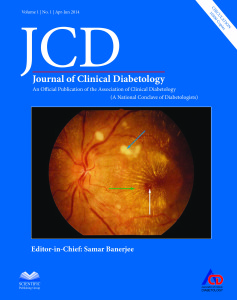 Diabetes mellitus is rapidly emerging as an important cause of mortality and morbidity in developing countries. It is an established risk factor for coronary heart disease, stroke, and end-stage renal disease. Diabetic nephropathy is one of the complications of diabetes mellitus that ultimately leads to renal failure, and renal failure is a cause of electrolyte imbalance among hospitalized diabetic patients; other causes are diarrhea, vomiting, diuretic use, and chronic laxative use.

Cognitive Dysfunction in Patients with Diabetes

The incidence of type 2 diabetes mellitus (T2DM) has risen, and this trend is likely to continue. Recent advances suggest that T2DM is a risk factor for cognitive decline. We are now encountering novel complications of T2DM, namely cognitive dysfunction and dementia. Although the treatment strategy for diabetic patients with neurocognitive dysfunction has received a great deal of attention, the appropriate level of glycemic control for the prevention of the development and/or progression of cognitive decline in elderly diabetic patients remains to be elucidated.

Ischemic stroke and vascular cognitive impairment are leading causes of long-term disability and constitute a major public health burden and a significant economic burden to health systems. An increasing body of evidence demonstrates that disorders of glucose metabolism including diabetes, and the intermediate states of impaired fasting glucose and impaired glucose tolerance, as well as the cluster of risk factors known as the metabolic syndrome, are important risk factors for ischemic stroke.

Neuropathic joints, often called Charcot joints, are caused by loss of sensation in the joint to the extent that they are damaged and disrupted. The damage and disruption is often not grave and early diagnosis on clinical examination and X-ray is often missed since the joints, although swollen, are painless.

Conventional basal insulin preparations have to be resuspended prior to injection and have low therapeutic efficacy and drawbacks like nocturnal hypoglycemia. There is evidence supporting improved pharmacokinetic and pharmacodynamic profiles of basal insulin analogues, glargine and detemir as compared with NPH.