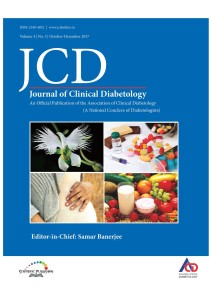 The Human Pancreatic Alpha Cell in Health and Disease: A Clinician’s Perspective

When Banting and Best injected extracts from pancreatic tissue intravenously or subcutaneously into diabetic dogs and humans, a marked reduction in blood sugar was noticed (reflecting the hypoglycaemic action of insulin). However, this was often preceded by a small transient elevation of blood sugar, which was initially thought to be caused by epinephrine. A few years later, this phenomenon was ascribed to a glucose-mobilizing substance, later named ‘glucagon. It took almost three further decades before the pancreatic α-cells were identified as being the source of glucagon, and hypoglycaemia documented as a trigger for the release of this hormone.

Use of Antidiabetic / Hypoglycaemic Agents in Cardiovascular Disease