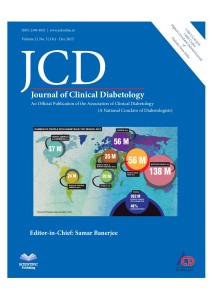 Diabetes Foot Care And The Durometer

Annually, one in every six diabetics develops a foot complication in their lifetime. Prevalent in 3.6% ofdiabetics, they are a rising health problem. With high cost of treatment and patients’ ignorance, there is anurgent need for coordinated preventive clinical measures to reduce the impact of diabetic foot. In India, 40,000legs are annually amputated of which almost 40% - 72% are diabetes related. Reduction of amputation by 49%- 85% through early detection, close monitoring and education is possible; reducing the burden on medicalresources. Thus, healthcare providers should educate patients regarding diabetes, its complications and theneed for self foot care.

Type 2 diabetes is the major cause of end stage rental disease. It is estimated that T2DM is the primary cause leading to kidney disease in 20-40% of people starting dialysis. Diabetic nephropathy is normallyestablished by the severity of urine albumin excretion.Research indicates that normal excretion is less than 7 mg/d1, although conventional cut-off for abnormal excretion is 30 mg/d.

Prevalence of Obesity in Young Males Females in Rural Punjab

Obesity has numerous health implications. Increasing rates of overweight and obesityhas reached epidemic proportions throughout the world especially in developed countries and is rapidlyincreasing in many middle-income and less-developed countries. Most of the studies on prevalence of obesityare conducted in urban population, so we conducted this study to evaluate prevalence of obesity in ruralpopulation in Punjab.

According to thepublished data, the number of peoplediagnosed withdiabetes worldwide has more thandoubled since 1980 to nearly 350 million.Glycaemia anddiabetes are rising globally, driven both by population growth and aging and by increasing age specific prevalence.

Non-alcoholic fatty liver in Type 2 Diabetes Mellitus study of factors 25responsible for it in a teaching hospital of Rohelkhand region (U.P.)

The morbidity and mortality in patients with type 2 Diabetes Mellitus(T2DM) is related to nonalcoholicfatty liver disease(NAFLD) and its complications. Various factors including insulin resistance areresponsible for the development of fatty liver. The present study is aimed to study the various factors responsiblefor NAFLD in T2DM.