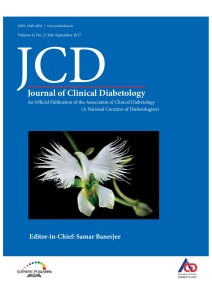 Study of Thyrodiabetes in a Tertiary Care Hospital

Diabetes mellitus is a common endocrine as well as a multisystem disorder, characterized by hyperglycemia, resulting from defects in insulin secretion, insulin action or both. Diabetes is a health problem affecting the population worldwide in general and India in particular. Uncontrolled diabetes with its many adverse effects like cardiovascular and kidney diseases along with dyslipidemia increase morbidity and mortality.

The Comparative Effect of Metformin, Voglibose Alone and in Combination on Body Mass Index in Non-diabetic Obese Subjects

Throughout most of the human history, obesity has been viewed as a sign of health and prosperity. But now it has been termed as an epidemic and asocial burden, with increasing prevalence worldwide.Obesity is also defined as an abnormal growth of the adipose tissue due to an enlargement of fat cell size (hypertrophic obesity) or an increase in fat cell number (hyper plastic obesity) or a combination of both; or defined as a condition of abnormal excessive fat accumulation in adipose tissue, to the extent that health may be impaired to produce adverse health consequences and is associated with increased morbidity and mortality

History of the Development of Oral Antidiabetic Agents

The history of antidiabetic medications maintain a great importance due to the so-called ‘epidemic disease of the century’, i.e. diabetes mellitus.1 The so-called Coca-Colanization or industrialization of the civilization has a negative impact on diet and lifestyle, and as a result, the incidence of type 2 diabetes mellitus has become a serious public health issue. The classic symptoms of diabetes were described long back in the ancient Egypt. At the time of the first attempts to treat the symptoms involved the mixtures of many natural products of animal or veterinary origin.