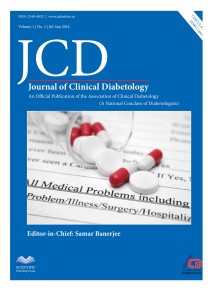 Diabetes mellitus is one of the commonest endocrine and metabolic diseases of childhood. Till recently, diabetes in children (defined as onset below 12 years) and adolescents (defined as onset between 12 and 19 years) was almost exclusively type 1 diabetes (T1DM) and this has changed, as there is increased recognition of a number of different forms of “non-type 1 diabetes” in the young. This includes type 2 diabetes (T2DM), maturity onset diabetes of young (MODY), fibrocalculous pancreatic diabetes (FCPD) and diabetes due to genetic disorders.

Diabesity: A Real Challenge for a Clinician

The global epidemic of obesity is the major contributing factor for increasing prevalence of type 2 diabetes (T2DM). The new term, “diabesity” is to describe individuals who have obesity and T2DM. Due to rapid urbanization, globalization, industrialization, and increasing life expectancy, urban as well as rural India is also facing this challenge of diabesity. People with diabesity are more prone to have associated metabolic syndrome, which in turn is a risk factor for atherosclerotic diseases.

Hypoglycemia is a very common side effect of insulin therapy and, to a lesser extent, of treatment with oral hypoglycemic agents. Severe hypoglycemia can precipitate adverse cardiovascular outcomes such as myocardial ischemia and cardiac arrhythmia. These are mainly secondary to autonomic activation which results in hemodynamic changes, vasoconstriction and rise in intravascular coagulability and viscosity.

Statin in Diabetes – Good or Bad

Over the last three decades, statins have played a major role in primary and secondary prevention of cardiovascular morbidity and mortality. Recently there have been concerns about a possible association between statin use and new onset diabetes. However the cardiovascular benefits of statins have been found to outweigh any potential detrimental effects on glucose metabolism and diabetes risk and thus should not be denied to moderate- and high-risk patients. The different lipids guidelines for patients with type 2 diabetes mellitus are not in consensus and thus clinicians need to exert clinical discretion when deciding on which guideline to follow.